1 in 7 people suffer from migraine. 60% of them are not diagnosed and therefore can not access treatment.

Empowering users to learn and communicate about their condition.

What Is A Migraine Aura?

If you feel dizzy, nauseous, or experience weird visual disturbances such as flashing lights or blind spots, you might be experiencing a migraine aura.

What is Migraine Aura?

According to the National Headache Foundation, aura migraine is said to affect “20% of migraine sufferers”. However, it is also possible to experience migraine without aura. A migraine aura is also commonly known as the “natural warning alert,” which lets you know when a migraine is about to hit and usually happens right before the actual headache.

What Causes Aura in Migraines?

Auras are usually visual but can also take the form of visual, sensory, motor, or verbal disturbances.

Fun fact: Did you know that famous artist Vincent Van Gogh may have suffered from migraines too? He would get “sick headaches” and people believed that he suffered from chronic migraines. Based on the swirling strokes in some of his works, others have speculated that “Starry Night” was actually a painting of visual distortions which he may have experienced during an aura phase of one of his possible migraine attacks.

Sensory migraine aura can coincide with visual aura, or happen by itself. It is characterized by a “march of symptoms”, a tingling that gravitates to another part of the body gradually, and is typically short-lived.

For some, migraine aura may be olfactory and they have a heightened sense of smell or start to smell things that aren’t actually present in the environment. Dysphasic aura is another type of aura, which brings about speech or language difficulties.

According to Migraine Buddy users, the top 6 most commonly reported migraine auras include fatigue, visual disturbances, irritability, tingling in the head, tingling near the eyes, and weakness. 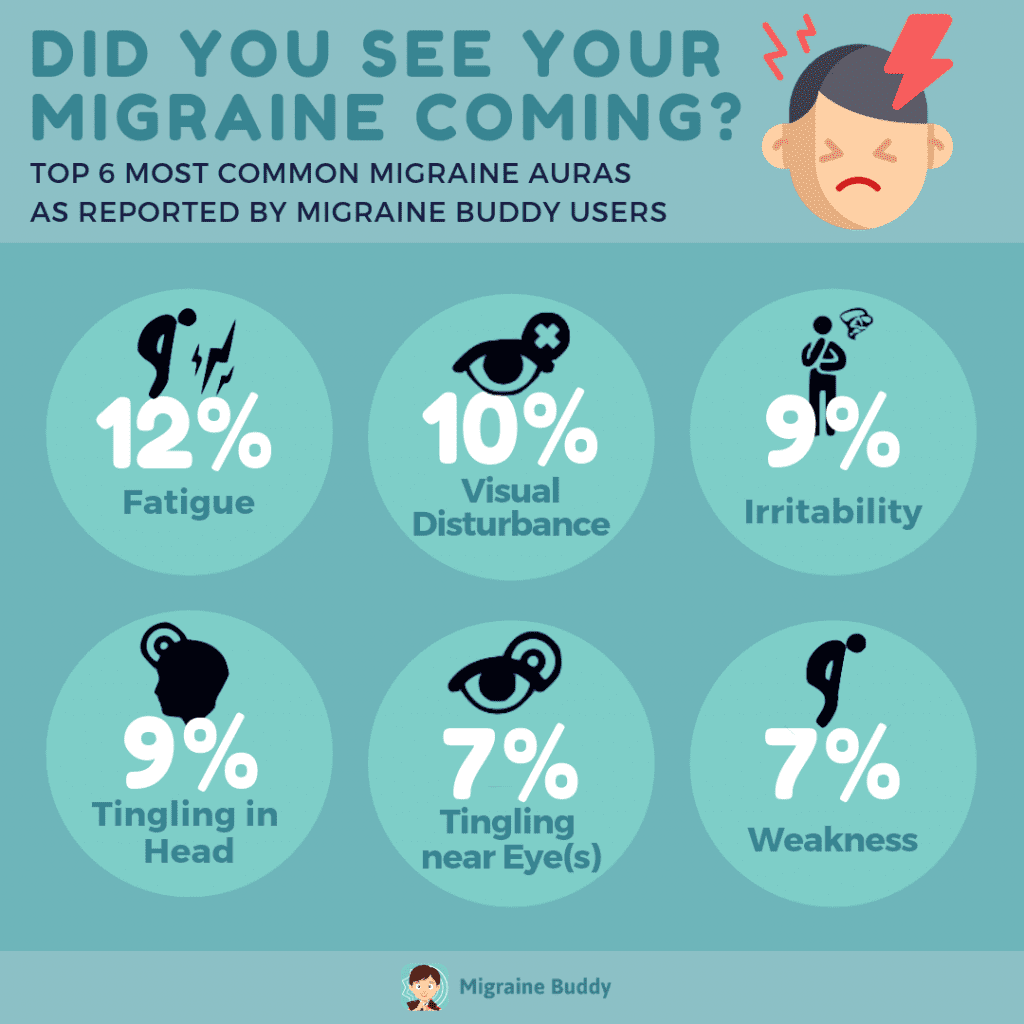 Why Are You Experiencing Period Migraine?

Tips For Parents And Caregivers of Young Migraine Sufferers

Leave your mobile to get a link to download the app

We use cookies on our website to give you the most relevant experience by remembering your preferences and repeat visits. By clicking “ACCEPT ALL”, you consent to the use of ALL the cookies. However, you may visit "Cookie Settings" to provide a controlled consent.
Cookie SettingsREJECT ALLACCEPT ALL
Manage consent

This website uses cookies to improve your experience while you navigate through the website. Out of these, the cookies that are categorized as necessary are stored on your browser as they are essential for the working of basic functionalities of the website. We also use third-party cookies that help us analyze and understand how you use this website. These cookies will be stored in your browser only with your consent. You also have the option to opt-out of these cookies. But opting out of some of these cookies may affect your browsing experience.
Necessary Always Enabled
Necessary cookies are absolutely essential for the website to function properly. These cookies ensure basic functionalities and security features of the website, anonymously.
Functional
Functional cookies help to perform certain functionalities like sharing the content of the website on social media platforms, collect feedbacks, and other third-party features.
Performance
Performance cookies are used to understand and analyze the key performance indexes of the website which helps in delivering a better user experience for the visitors.
Analytics
Analytical cookies are used to understand how visitors interact with the website. These cookies help provide information on metrics the number of visitors, bounce rate, traffic source, etc.
Advertisement
Advertisement cookies are used to provide visitors with relevant ads and marketing campaigns. These cookies track visitors across websites and collect information to provide customized ads.
Others
Other uncategorized cookies are those that are being analyzed and have not been classified into a category as yet.
SAVE & ACCEPT